Within our 2020 Newsletter we have looked at a small selection of projects Collins and Curtis have had the privilege to work on this last year. Projects include intricate carving, details for masonry repairs, bespoke architectural stonework, stone kitchen and bathroom worktops, stone memorials and a number of fire surrounds in portland stone and hearths in a variety of sandstones, limestones, granites and slate. To view our newsletter click here. 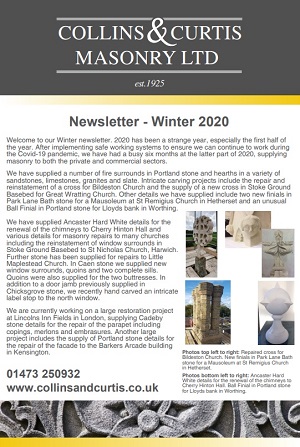 Formerly St Mary-at-the-Quay but now called Quay Place, was until its recent regeneration a redundant medieval Church. The Grade II Listed church which was believed to have been built around 1450 and 1550, is located next to Ipswich’s quayside. It suffered from war damage, damp, a decayed roof and leaning walls – that was until the 17 month restoration programme gave Quay Place a new future as a centre for both heritage and wellbeing activities, café and an event space alongside therapy provision.

The Churches Conservation Trust teamed up with the charity Suffolk Mind, and together they secured Heritage Lottery Funds and European Regional Development Funds to cover the cost of the restoration.

In April 2014 Bakers of Danbury started work on the project as Principal Contractor. The specialist restoration works include the structural stabilisation and incorporation of a large contemporary mezzanine floor for office space. A new contemporary design extension, built to provide further offices and consulting rooms.

Collins and Curtis supplied all new stone for the restoration and new build. We took measurements onsite to produce templates, which were then used to manufacture the replacement features to arches, jambs, tracery, cills and copings. We used traditional methods of masonry to manufacture the stone details and carried out the fixing and replacement of the stone during the whole restoration.

Collins and Curtis have completed the 2016 phase of restoration works to Gonville & Caius College, Cambridge. Replacement masonry units in Ancaster Hard White stone were used to rebuild the Gables. 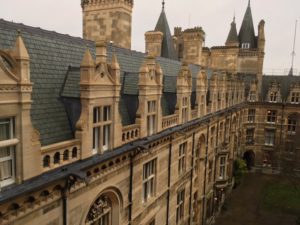 During 2016 Collins and Curtis gave a number of shop fronts in Oxford Street, London a makeover using Portland stone and Granite 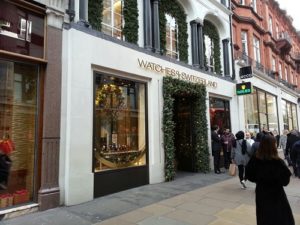 Collins and Curtis are proud to have been involved in the RICS award winning conservation and extension works on Clare Priory a medieval Church in Suffolk – thought to be one of the oldest in England.

The project involved conservation of the original structure to enable its continued use as a meeting area and reception, and a contemporary extension to give access to a new worship area space. 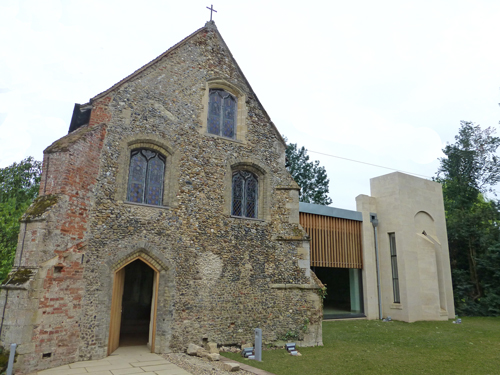